Lost at Sea off Krakatoa

We’re hanging around near Pelabuhan Ratu (West Java), surfing these little righthanders down there. There’s the late Dave Shiller – a geologist who lives in Jakarta and works for an oil company – Robbie McIver and myself. Robbie’s a bodyboarder, Dave rides a kneeboard and I ride a shortboard. We’re looking for a bit of adventure and the prospect of unsurfed breaks, so we decide to go and check out Panaitan. We tee up a boat and collect our permits from the port authority at Labuhan.

The captain picks us up down the river – it’s your classic, typical Indo boat. About 28ft, small wooden wheelhouse at the back with the engine in front of it, and the driver sitting on wooden slats at the back with the tiller. He has a little wooden frame up front so we buy a tarp and cover it so we can stay dry. We steam up the river and into the Sunda Strait where we hug the coast and head towards Ujung Kulon National Park. It’s like the Everglades – mangrove forests everywhere. We get to Ujung National Park and there’s a ridiculously well-maintained camp there – it looks like a scout camp – beautiful manicured lawns, Indonesian flag flying, galvanised huts – completely unexpected! We stay there, get up early in the morning and the first thing I see is a bloody great monitor lizard out the front of the hut. Absolutely huge! I can’t get over it. 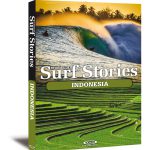 Stormrider Surf Stories Indonesia brings together the richest, most diverse collection of surf tales ever published about the world’s most wave-blessed archipelago.

We set off to Panaitan. There’s a rangers hut near a reef pass. A left on one side and a right on the other. We surf it for a day or two. Once the wind and swell drops curiosity gets the better of us so, we ask our captain to take us around the corner – a fair drive around a very exposed headland. As we sail across the headland there are lefts breaking inside of us all along, but it looks unmakeable. At the end of the headland we enter a very deep bay. And there it is – this left just reeling down the reef, getting faster and faster as it goes. We decide to surf it. I manage to get a couple, but can’t make them on my backhand and get smashed. Robbie gets a couple on his bodyboard but we decided to look further. We head deeper into the bay, spotting a left and a yacht’s mast in the lagoon. We figure it’s surfable and paddle out. It’s big, long, and flat, soft fun. The next morning we head back to look at the point we’d seen and it’s different – it’s bigger and breaking better. We get a couple of waves but it’s incredibly intimidating. It needs a better tide. It seems to grow and get faster as you get further down the line. It’s intense! Dave breaks his kneeboard so we decide to get out of there. This break is soon to be known as One Palm.

One Palm Point is a world-renowned left holding some of the longest barrels on Earth in a pristine wilderness setting. It is super-shallow, very dangerous and hard to get to. Low tide equals suicide for all but the pros and mere journeymen have to wait for mid tide and/or smaller swells to make it from the air drop to deeper water in the channel. Requires a fairly high line to stay out of trouble making it a real backhand challenge. Can be incredibly long when aligned on S-SW swells and any E wind. It’s not always perfect by any stretch, but has rideable waves in the highly consistent bracket (7/10). Smart pig-doggers wear rubber!

We figure there’s enough swell to surf a wave on Krakatoa – apparently a left-hander. It’s not far off dark when we set off. We head around the corner and back to our rangers’ camp to gather our stuff and bolt. With Krakatoa ahead in the distance we sit back and try to relax. It feels strange from the word go. The trade winds come up on dark – blowing hard. We’re under the tarp, trying not to get wet, being lashed by the ocean, and wondering what the hell we’re doing. After an hour or so, it feels that the wind’s changing. Something isn’t right so I head down the back and find the captain, half asleep, holding the tiller arm – just sitting there. His thinking is if he keeps the boat at the same angle to the wind, he’ll stay on the course he’d set visually on a distant Krakatoa on dusk.

I ask him: “Where’s Krakatoa?”, to which he replies confidently “dead ahead”. I know the wind has changed, and ask him again and he replies, “dead ahead”, but I know it’s not the case.
Next question: “Where’s your compass?” Of course he doesn’t have one.
I return up front and tell the boys, “We’re in deep shit here, old mate hasn’t got a compass”.
A week or so previously we’d been reading in the Jakarta Post about some European guys who’d been lost down the coast off Enggano. They were down to eating their toothpaste to keep them sustained! We’re freaking. The straits here are radical and if you get lost you’re in serious trouble. And it’s pretty clear we’re lost.

So we decide to make a compass. We have foam from Dave’s snapped kneeboard and we have a medical kit. We use a torch battery to magnetise a needle from the medical kit by putting a current through it. We fill half a coconut shell with water, float the foam disc on top of it with the magnetised needle attached. The process takes forever – in the dark, getting hammered, but it works! It might not be the slickest compass ever made, but the needle seems to stay in the same direction – it looks like it’s doing the job.

We have nothing to lose, so I take it down the back and we basically relieve the captain of his duties. We take it in turns, one steers the boat and another looks after the coconut compass. During the night our captain comes to us and says we can still go to Krakatoa, to which we reply “Fuck-off – we want to go home back to Carita”. So onwards we steam all through the night.

When the sun comes up we’re shitting ourselves, because we can see nothing ahead but clouds on the horizon. Gradually all the clouds move except one – it reveals itself as the mountain behind Carita.
We’re OK! If we’d gone with the captain’s assurances we would have found ourselves out in oblivion in the Sunda Strait as sure as anything.

The fun doesn’t stop there. An hour later the engine’s running but we’re not moving – the clutch has gone. There’s a spare on board, it obviously happens regularly. We throw an anchor line over the side while the captain starts ripping things apart. We’re not in the mood to be helpful, so we mope around up the front. I look down at the anchor line and it’s swaying limply, this way and that. We check the admiralty charts Dave’s brought with him and realise we’re in a humongous depth of water, the anchor is just drifting – and so are we – back out into dire straits again.

Eventually they get the motor going again, but it’s getting late in the day, the boat isn’t running terribly well, and we’re thinking, “Here we go again!” This wasn’t going to be good, it’s getting dark again and another night with an unknown amount of fuel is not something we’re looking forward to. As if that’s not enough, about 200 metres behind us a giant, twisting waterspout springs up! We go right through its path. They’re serious stuff. I’ve never seen anything like it since.

We finally make it to the river at Carita Beach, get back to the Beach Hotel and get on the piss.
The next morning the captain’s knocking on the door, repentant, cap in hand. He’s shitting himself because we could have handed him in to the law. But we don’t. We buy him a compass instead.

If you read ebooks on multiple platforms, please choose our Apple iBooks over Amazon Kindle, who take around 20% more for each ebook sale. Thanks for your support. Dismiss