Queensland’s Gold Coast is one of the most intense surf zones in the world, combining 40km of legendary spots with a huge, hungry surf population. It’s the most visited stretch of coastline in Australia, but don’t be misled by the name ‘Surfer’s Paradise’, as the heart of this zone is dominated by skyscrapers, not palm trees and the hordes of tourists rule out anything approaching deserted. However, year-round warm temperatures, a raging nightlife and endlessly long, right pointbreaks tempt southerners and foreigners alike to try their luck in Australia’s most competitive line-ups.

Even though Duranbah is technically in New South Wales, it has become one of the main surfing focal points of the “Goldie”. The rivermouth jetties have helped form powerful wedging peaks that provide ample tube time at one of the world’s finest beachbreaks. Crowds can be insane, mainly because when the points are sleeping, D-Bah will have thumping little A-frame wedges, somewhere along its length. Refraction off the breakwall helps to focus power on the peak and it will pick up any swell from NE around to S. Huge local crew dominate the line-up, so you might want to check some of the other beaches south of the river for less stressful sessions. 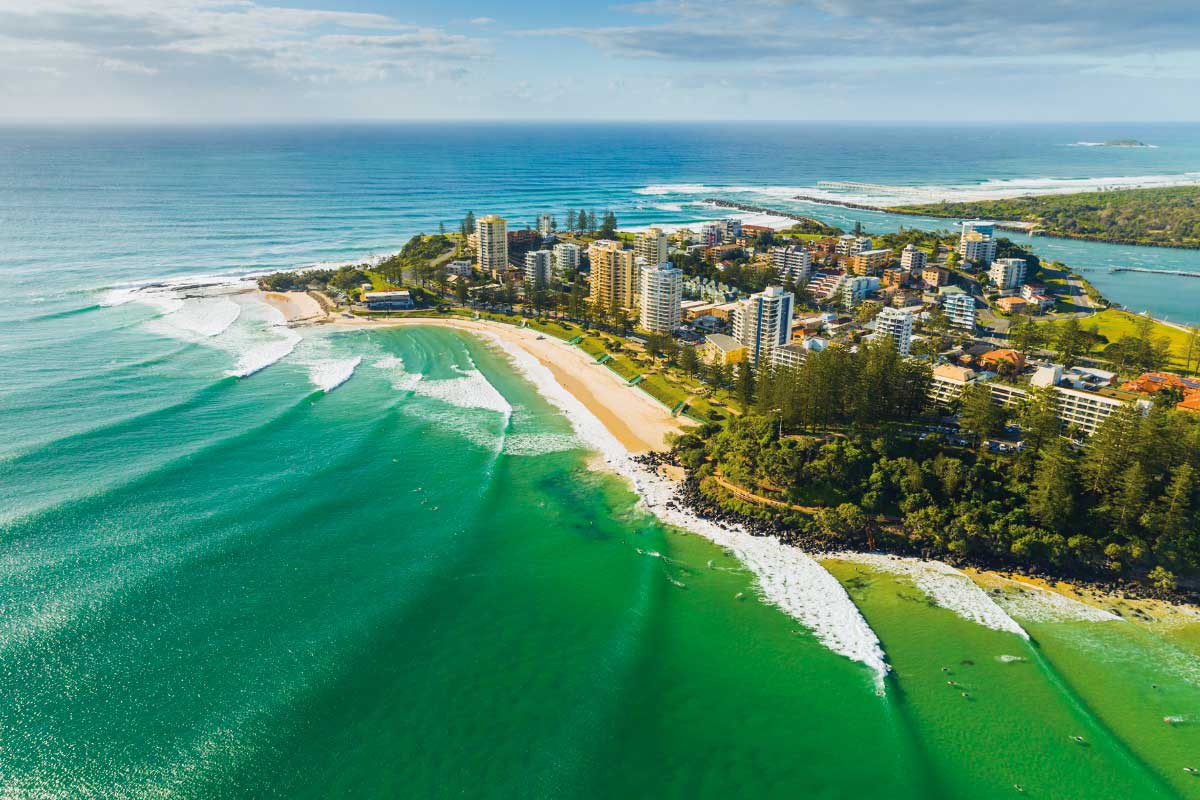 Snapper Rocks has had a personality make-over ever since the Tweed Sand Bypassing Project started pumping sand northwards and is no longer second fiddle to Kirra when it comes to dredgy barrels. It starts from behind the rock, where just a few locals have dialled the launch into a square, thick-lipped pit before the backwash hits and twists the barrel just as it emerges out into the sandy expanses of what has been dubbed the Superbank. A frothing pack of rippers and longboarders pounce on anything that moves, slashing and mainly burning any surfer perceived to be weak or undeserving. It then opens up to two parts wall one part barrel as it progresses 200m down towards the next rocks at Little Marley, before traversing Rainbow Bay for a further 400m of cruise and crack. E-SE provides the ideal swell direction, since too much S will by-pass the point, losing lots of size and shouldering off into deeper water, while NE will angle in and close-out whole sections of the sandbar and even blow holes in it. Handles S winds well and breaks through the tide, but the sweeping current is always there to drain your paddling power.

The tree-lined Greenmount Point provides a curve of boulders for the sand to stick to, resulting in some long easy rights and a bit of protection from the dreaded SE winds. Since the advent of the Superbank, Greenmount and the adjacent Coolangatta Beach have been swallowed by sand and tacked onto the Snapper, Rainbow endless line-up. It still shows some of its longboarding heritage and can be less sucky than further up the line, but then again it can churn off relentlessly towards Big Groyne Kirra (see Venue) if it’s in the right mood. Handles more NE in the swell, which breaks up the sections and any S wind. 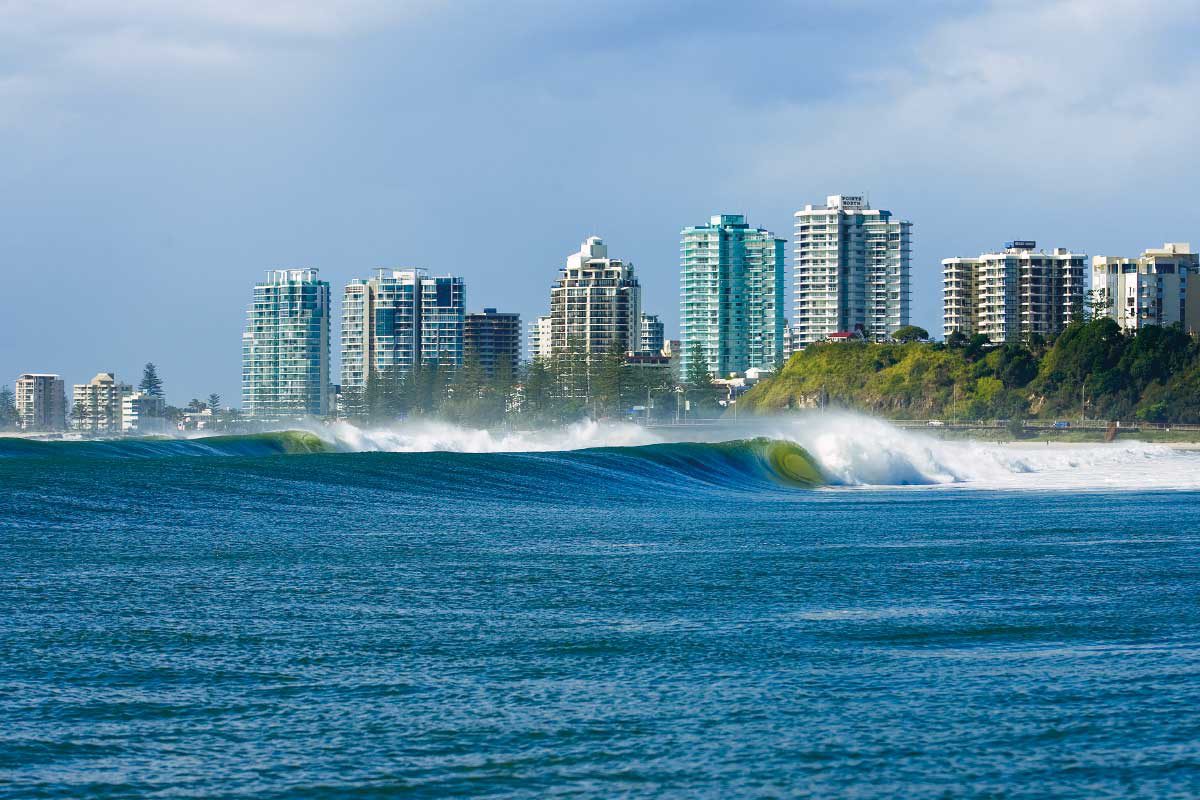 Kirra is Australia’s and probably the world’s best righthand point that breaks over sand. Air drops into various tube sections, which seem to suck-out below sea level, adding sand to the already ridiculously powerful and thick lips. Super long, slabby sections need breakneck speed to negotiate while praying the inevitable drop-in wont happen on the deepest tube of your life. It all depends on the constantly changing sand and breaks at about a third to a half the size of the prevailing swell. Big, solid SE groundswell is the preferred element, while E and even NE cyclone swells can also produce epic barrels if the sand is right. The sweep down the point is legendary, so many run back up the point after every ride.

The Alley at Currumbin has very long rights, well sheltered from the strongest SE winds. Rarely a barrel, it lazily peels for hundreds of metres, just asking to be ripped to pieces. It is such an accommodating wave that all types of surfcraft tackle it making the crowds of longboards, SUP and even kiteboarders a bit daunting. Best with a SE swell up to double-overhead, SW wind and lower, outgoing tides to hold up the walls across the rivermouth. The beaches south and north of the Alley through to Palm Beach hold plenty of less-crowded peaks.

Burleigh Heads can be so awesome when the swell has S in it and the wind is SW offshore, shaping up thick, dredging barrels breaking over sand in front of a basalt boulder shoreline. After a long, leg-aching ride to the shorey shut-downs, it’s a jog back up the point and over the slippery boulders before dashing for the outside against the rip that drags you back down the point. When the rest of the coast is closed-out, Burleigh will still be holding and barrel-hungry chargers will paddle out from the Tallebudgera rivermouth to the south, where there are more waves. Cyclone swells can blow holes in the set-up and it’s rare for all four sections (Sharkies, The Cove, The Point and Rockbreak) to link-up. It’s not as long as Kirra and not quite as crowded, but unfortunately it’s more localised.

The Miami stretch used to be a bit of a quiet spot away from the crowds, but these days nowhere is empty along the Goldie. Beat the wind by getting up early and avoid high tide when the waves go slack and the outside/inside channel cuts length of ride. Broadbeach is a continuation of the Surfers Paradise theme with plenty of fun beachbreaks to choose from, which range from straight-handers to long workable walls. Occasionally fires off some good barrels at lower tides and picks up NE swells better than SE, which shows better further north. This whole stretch will close-out when the wave faces exceed 6-8ft, which is when all the pointbreaks will be working. Surfers Paradise itself is more dedicated to swimmers, so don’t surf between the flags as the lifeguards don’t have a sense of humour. In-between the patrolled areas there are various peaks, sometimes slow and mushy, perfect for beginners and sometimes sucky and walled up with hollow bits, often in summer NE swells, when the crowds make it a real lucky dip as to whether you have a good session or not. All tides up to 6ft. Parking can be tricky and the backdrop of hi-rise hotels, casinos and swanky apartment buildings is a rare one for Australian waters. Narrowneck used to be off the surfer’s radar until an artificial reef was built to create an erosion protection solution to prevent the beach being inundated during storm swells. While this part of the project is considered to have worked, the bonus surfing wave has been attracting plenty of takers since the sandbags trip up a decent right on SE swells and a left in NE’ers. ‘Naz’ is not the most exciting wave but can provide more shape on junky, onshore days than the long expanses of Surfers Paradise beaches stretching south. On its good days, there’s pits to be found and a bit of extra power over the reef, plus a shorey section that bodyboarders like. Gets crowded as it is the first stop from Brisbane and is a regular local contest site. From Sea World you can take a look at The Spit, which isn’t quite as developed as the rest of this coast, receives plenty of swell and has tons of empty peaks stretching as far as Main Beach. The main event is usually a left breaking between the Southport Seaway jetty and the Spit sand-pumping jetty, which provides plenty of raw materials for nice banks, both here and over the rivermouth at South Stradbroke Island. Its other fine quality is being able to tame the NE sea breezes better than any Goldy spot. The Spit is popular with tourists and beginners because there is less hassling and the waves are generally slopey and manageable when small. Can get hollow in a stronger, moderate swell, but it closes-out as it exceeds 6-8ft faces, plus the currents can ramp up quickly. The northern jetty is the most easily accessible of the South Straddie breaks and the trim peaks get insanely crowded as many dash across the channel that is famous for as much shark traffic as boat traffic.

Swell and Wind – December-March is tropical cyclone season in the Coral Sea, but most NE swells are usually small with short period. During this time E swells are far more common and SE to even S swells still arrive with greater height and period. Statistically speaking, March to July will have the biggest average size, more groundswell and mainly SE winds. The best SW winds often blow from May to August. September-December sees lots of N winds mess up the NE-facing coastline. As a general rule the pointbreaks crank from low-mid. Tidal range can reach 2m. 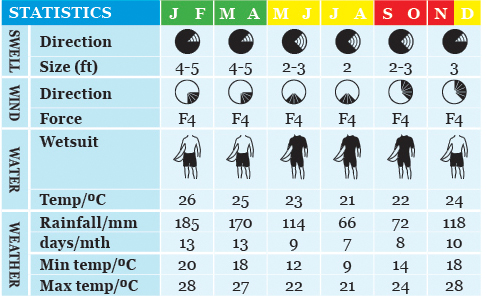 Weather – November to April is the ‘wet’ season with some rainy days and warm temperatures. Cyclones usually only affect northern Queensland. It stays pleasant throughout the dry season (May-October) when nights can get a little bit chilly, so you may need a 2mm steamer in the early morning. Rest of the year it’s boardshorts, or a shorty for the early mornings.

Hazards and Hassles – The most likely problems are drop-ins and collisions at zooed-out spots. You stand more chances being attacked by an aggro local, than a shark! NE winds bring in the nasty bluebottle jellyfish. The skin cancer rate is very high. Use more than just sunscreen.

Handy Hints – There are dozens of surf shops stocking all the gear at bargain prices. The Aussie beer culture leads to some serious nights out, but it’s still crowded for the dawn patrol. Cheap food and drink at RSL Clubs. Queensland has a reputation as the ‘Police State’, with harsh drink driving penalties and draconian cannabis laws. Avoid where possible!

—  The Mechanics of Snapper

If you read ebooks on multiple platforms, please choose our Apple iBooks over Amazon Kindle, who take around 20% more for each ebook sale. Thanks for your support. Dismiss